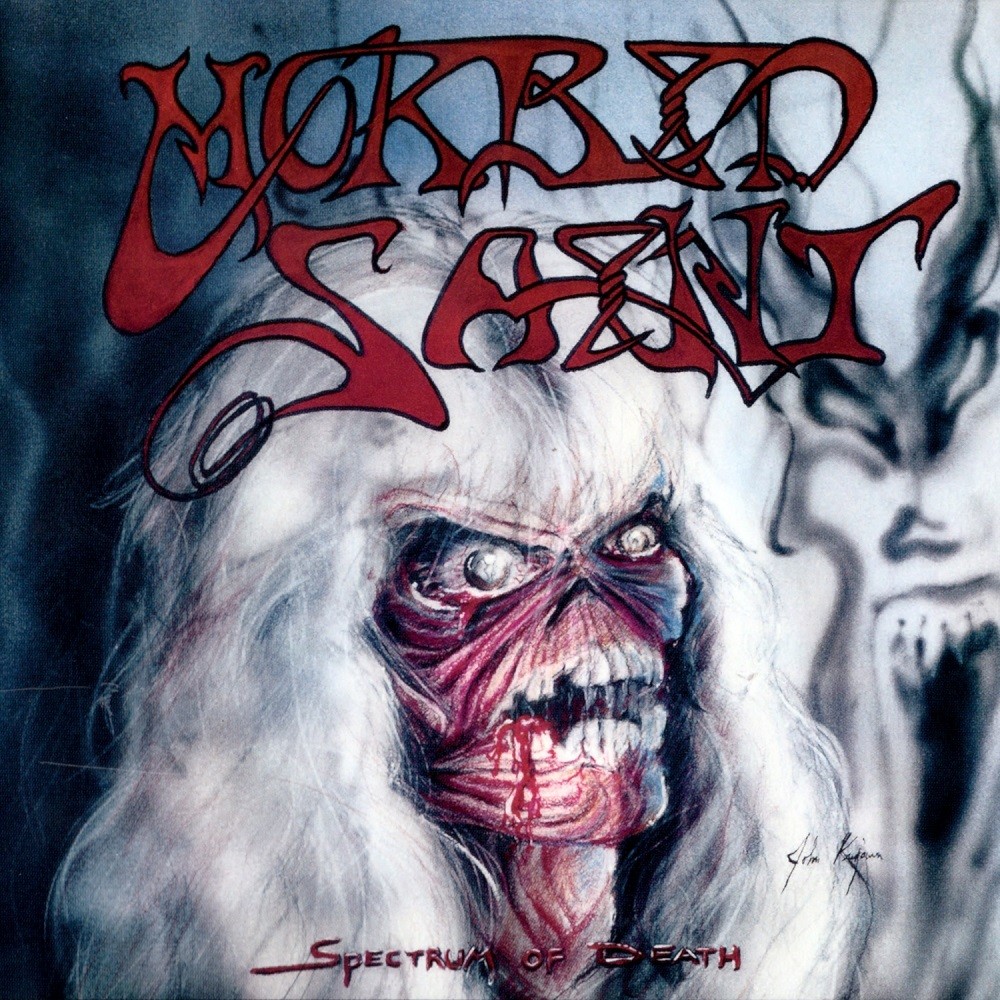 If you have been paying attention to my musings in The Pit Clan Challenge then you won't be surprised to find that I have given this record four stars.  It characterises that rabid and vicious thrash metal that I enjoy so much and only the fact that some of the production work on this is truly terrible (as in beyond being able to simply be considered kvlt or cool) then a full five stars would have been easily awarded.

For sheer lack of fucks given the album scores about a ten at least, this is a record forged out of complete abandon of compromise.  It starts off relentlessly and ends up the same without once letting up.  Every aspect to it feels bestial and evil in the most primitive sense.  Whether it is the menacing vocals with their sneer of derision and mocking undertone, the bashing fury of those drums or even the manic strumming of the bass underneath the charging dual guitar attack, it all has a fee for antediluvian values throughout.

Considering the band started out some six years before recording this by just playing Priest, Maiden, Sabbath and Crüe covers, what they eventually got to transcribe to record was far removed from their covers days.  This is crude and unrefined music for ears of fans who genuinely don't care too much for compositional excellence or song writing prowess.  Each track has one intention, to rip your fucking face off!  And they do it, eight times in a row.

As I mention above, the main issue here is the production job sounds terrible.  Notwithstanding the fact that it kind of suits the ideal in so many ways it is too obvious even for my extreme metal scarred ears for me not to notice.  Instead of charging the energy in the record it kind of blunts it a little bit although I still get multiple lacerations after each spin of this record.

An underground classic! Spectrum of Death is brutally intense thrash metal that takes no prisoners.

Morbid Saint is about as cult as you can get! They’re one of those underground bands that received next to no recognition while they were active, only to gain masses of fans and critical praise in the years since their demise. Pat Lind (vocals), Jim Fergades (guitar), Jay Visser (guitar), Mike Chappa (bass) and Lee Reynolds (drums) formed Morbid Saint in 1986 in Sheboygan, Wisconsin with the goal of creating the most deadly metal music imaginable. They had the good fortune in these early years of sharing a manager (Eric Greif) with Chuck Schuldiner’s pioneering Death outfit and even opened numerous concerts for that legendary band. They released a demo called Lock Up Your Children in 1988, complete with crappy cover artwork drawn by Visser’s sister which was then coloured in by the band members themselves. It was limited to 200 copies that sold out very quickly and I can only assume that one of those cassettes made its way into the hands of someone at Mexican label Avanzada Metalica and that said person very much liked what they heard. In 1989, the label re-issued Lock Up Your Daughter as an album called Spectrum of Death, meaning that the band’s only official release was never intended to be anything more than a demo.

I’m not going to claim that I’m one of the few out there that worshipped this album when it was first released. The lack of Internet back in the day meant that I only really became aware of the more major releases and without the ability to “try before you buy” it was rare that I’d take a punt on a little known album by some unfamiliar band. It’s not like the album cover screams of quality either, with a very Eddie inspired demon figure that looks like it was scribbled down in just a few minutes (turns out this was not the cover the band had selected, so they were totally surprised when it came out). But word of mouth, and in particular sites like Rate Your Music, have spread the message that Morbid Saint should not be ignored. One look at the current thrash metal charts finds Spectrum of Death sitting in fifth position for all time and when you consider that the only bands above them on that list are Metallica, Megadeth and Slayer, that’s a seriously lofty position in the company of gods. Could it possibly live up to those expectations?! Damn straight it can! Spectrum of Death is thrash metal at its most venomous with shredding riffs, full speed drumming and vocals that could tear the flesh from a polar bear from long range.

Spectrum of Death is like Dark Angel, Kreator and in particular early Sadus combined and then turned up to eleven. Despite the chaos that this description brings to mind, Morbid Saint manage to keep things relatively together throughout and offer some truly memorable and moshworthy tracks along the way. As you would expect for an album that was never meant to be an album at all, the production is not all that great, but everything is audible enough and the abrasive impact suits the intensity of the music like a glove. As much as the thrashing riffs and leads kick my ass, it’s Lind’s vocals that really stand out. While other thrash bands were adding more and more melody on the vocal front, this guy ripped the genre a new hole with his throat destroying performance. Check out Damien, Lock Up Your Children or the classic Assassin if you want to find out whether you can cope with the extremity on offer here, but be prepared for what is a harsh, uncompromising release from both production and musical points of view. It’s great that after all these years of listening to metal music there are still hidden gems to be uncovered and if you haven’t found this one yet, the band’s recent reuniting makes it a perfect time to start digging.