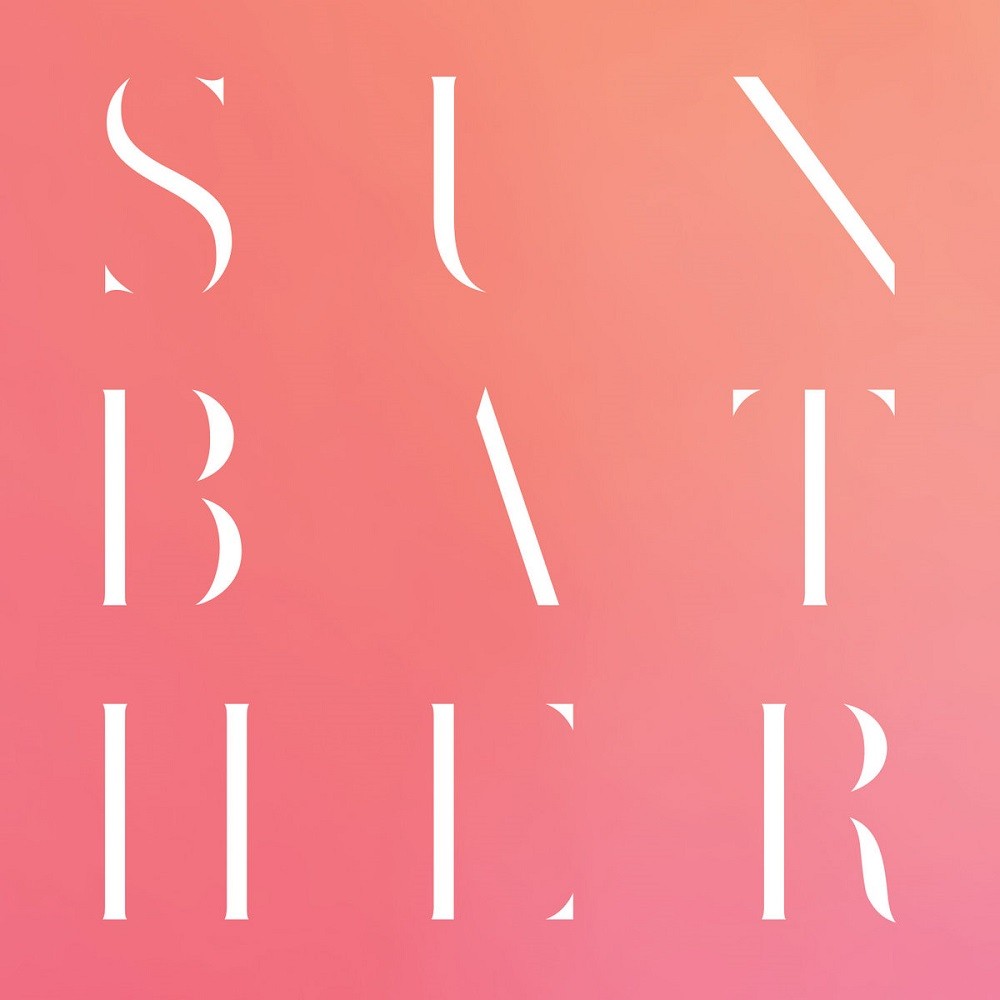 This album is surprisingly un-appreciated on this site (atleast at the moment of my writing). Deafheaven's Sunbather is otherwise quite the critical darling among various music databases. Look no further than Allmusic's perfect 5 stars out of 5, Pitchfork's 8,9/10 or even the listener-approved boldened 3,61 out of 5 on RYM, ensuring it rank #5 out of all 2013 releases there, for proof. From what I've gathered, the band made quite the kickstart into their career having multiple critics praise and hype their music to extents the black metal genre - that they were usually associated with stylistically - wasn't used to at the time. The success didn't come without a price, as their popularity also brought along criticism and a lot of questioning of their black metal cred, due to their visual appearance and combination of unlikely musical styles.

As far as I am concerned, I rather like it. Sunbather especially stands out in the band's discography. Not just for being their most critically acclaimed album, but also for being their most consistent one. Out of all of blackgaze I'm familiar with, Deafheaven also stands out in terms of intensity and aggression, creating a powerful wall of sound, that feels perfectly satisfying, when it's hard shell breaks down on occasions to reveal a more gentle and melodic side. At the forefront of the group is vocalist George Clarke, who's intense black metal screeching manages to stand it's own next to the loud onslaught of instrumental parts.

Highlights of the album are hard to pin down, as there is hardly a dull moment for me to be found on the record. As the bulk of the album serve the four main tracks, which get padded out by the shorter experimental interludes. Dreamhouse, which served as the album's single upon it's release a month before the album filled store shelves, is a nice kick-off. The track, that narratively stands on it's own, initiates the album in a more optimistic fashion, meshing heavy black metal with a more flamboyant shoegaze to build up momentum. Once the 9 minute playtime-mark is passed the record starts developing into a thematically more inter-connected narrative about the lyricists' frustrations with his current life situation. Ultimately I'd say, there is no bad element to the album, though I must admit I tend to lose some attention once the third instrumental track Windows kicks in. My personal favourite track is the title track, as it serves best as the album's representative summary, but I'd again repeat, that all four of the main songs are excellent - from Dreamhouse's dynamic build-up to the roller coaster ride, that is Vertigo and all the way to the singer sulking in daddy issues in Pecan Tree (Yup, I do consider that good for some reason).

Before Deafheaven's 2013 sophomore album Sunbather was released, the genre that we now know as "blackgaze" was still very much in its early development; the word "blackgaze" being simply a compound of black metal and shoegaze. Anchored by an artist such as Neige and his bands Alcest and Amesoeurs, the tag of blackgaze could best be described as "shoegaze with black metal elements". And I can completely understand why, if you were a fan of heavy aggressive nature that the title "black metal" suggests, blackgaze wouldn't have been your cup of tea.

Deafheaven decided to flip that script with their "black metal first, shoegaze second" approach to the genre. And it helped them out...for better or worse. The band's 2013 sophomore album Sunbather is one of the most discussed records of the entire 2010s decade, period. It will also most likely go down as that decade's most important metal album based on cultural impact alone. Before you've even started listening to "Dream House", some metal purists would be shocked and disgruntled by a bright pink album cover that could not be missed. What about Boris' Pink?

But enough about the albums history, how does it stand up as a piece of artwork? Well it certainly is eclectic. I know why this album is deemed controversial and why the typical consensus is either complete infatuation or outright disgust. I see myself on the former side of the aisle, but I do see flaws within and it is important to highlight them.

For one, unlike most black metal (including early blackgaze), the major key harmonies are jarring. For a genre that is viewed as having a generally cold atmosphere, why did Deafheaven create something so warm and longing?

For a blackgaze record, it does not really meet too many of the qualifications that title would suggest. Shoegaze is typically very slow, dreary and, as its name suggests, invokes bending your neck forward and looking down at the floor. This record is far more uplifting than that. Lots of fast tempos, blast beats and ferocious howls from George Clarke. It is more reminiscent of something you might hear in post-metal or atmospheric black metal. The jarring dichotomy of the two emotions together create a one of a kind heavy metal experience. "Dream House" is still my favourite Deafheaven song, but the beautiful song structures and formatting of "Sunbather" and "Vertigo" make them instantly recognizable. Unfortunately for me, the album does lose steam near its conclusion; the major harmonies of the first two/three songs vanish with "The Pecan Tree".

One thing that I greatly appreciate from the world of atmospheric black metal is the song structures. This is still a black metal record first and foremost, but you have to give your listeners a moment of reprieve; to collect their thoughts before the next wall of sound assault comes the listeners way. Deafheaven get that, and while their are some really long songs throughout the project, none of them feel "long". Quite the contrary, in some cases, especially on "Dream House", "Sunbather" and "The Pecan Tree", the songs almost end prematurely. "Vertigo" by contrast starts with clean guitars and soft percussion and evolves into distorted tremolo picking, blast beats and Clarke's shrieking. The album also includes some separate interludes as well, including the very pretty "Irresistible", the unsettling intro before transforming into acoustic guitar strumming on "Please Remember", as well as a spoken word interlude on "Windows" just before the finale. That last interlude does not really add much to the overall experience in comparison to the other breaks.

On a record such as this, production is key. You do not want the mix to become overwhelming when everyone is playing this fast and all at the same time. Thankfully that does not seem to be very much of an issue during the instrumental passages. Some of the electronic elements, most notably the first section of the interlude "Please Remember" sound really cheesy. Also, Clarke's vocals always feel as if they are being drowned out in the mix. Perhaps par for the course in this branch of black metal, but something that may have been overlooked.

So who is this album for? It's major harmonic song structures make me believe it is meant to be more mainstream "accessible" black metal. The vocals suggest otherwise. As a black metal album, it is solid as well, but as mentioned at the start, some metal purists just don't like change and they will dismiss this record simply based on principle. Deafheaven found themselves between a rock and a hard place with Sunbather, an album meant to please everybody, but perhaps found themselves more isolated than before...at least initially. Rest assured, with bands like Alcest still around, as well as new faces such as White Ward, Sylvaine, and Harikari For The Sky(?), Deafheaven expatiated the process for a new wave of heavy metal. I think we should bask in its rays.

This was (and still is to some extent) a controversial record upon it's release as debate raged about whether it was even a metal album (which it is), let alone a black metal album (which it may or may not be), exacerbated I think by the "blasphemous" pink cover which couldn't be any further from the black and white monochrome aesthetic of BM (unless it was a rainbow, I suppose).
Blackgaze as a genre is a divisive issue in black metal circles and I can see why many adherents to BM orthodoxy would take against it, particularly as, generally, it has more in common with post-metal bands like Kauan rather than Mayhem, Darkthrone and even (early) Ulver. For me it's a genre who's releases I tend not to pre-judge before hearing (I know we shouldn't with anything, but come on, seriously, who never goes into an album without certain expectations?) The reason is that there are albums under this umbrella that I really like and many that I really don't, so I'm never quite sure which I'm gonna get. For me, this is one of the former, as it has more than enough of an atmospheric black metal influence to satisfy. The songs are airy and expansive, relying on repetition as do most atmo-black releases, along with the pummelling drums, tremolo picking and down-mixed shrieking vocals common to the genre. The post-metal aspect of the record, particularly the slower sections, add a certain melancholy air that, when combined with the faintly disturbing lyrical subject matter coming across as something akin to the internal monologue of a potential serial killer, produce an unsettling effect on the listener.
It's no great surprise that a band that could shake an, albeit small, corner of the musical world like this, hails from San Francisco, with it's history of being a prime mover in both the psychedelic and thrash metal movements, both of which were pretty big revolutions in their particular areas. That openness to new ideas and concepts are integral to Sunbather's success I believe, allowing Deafheaven to forge something original from what is essentially a very conservative genre, the importance of which shouldn't be understated, This is because, despite the lyrics, the BM blasting and the occasional hint of wistfulness, the overarching sound of Sunbather feels very positive (well it does to me anyway) and that is anathema to a lot of the black metal community. So of course the kvltists will scream that this has sold black metal out, but let's face it, they're always pissed off anyway, so that's kind of irrelevant. You really need to go into this without any preconceptions to get the most out of it. There may actually still be too much BM in this to appeal to many outside of the usual blackgaze fanbase and not enough for the BM hardcore, but despite this, for those willing to take it for what it is, there is a lot to like here.

I don't get the hype. Sounds like a completely average post-black/blackgaze album. There some interesting sections and cool melodies here and there, but for the most part none of tracks manage to be memorable or evoke any strong emotions. Sunbather is not bad by any means, but I've heard this sort of thing done much better by other bands, like Woods of Desolation.