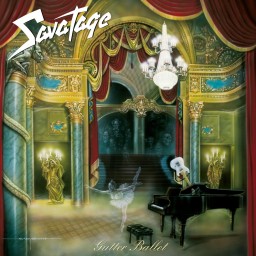 As many of you would likely know by now, Florida heavy legends Savatage have never offered me much appeal & I've always regarded their immense underground popularity as somewhat of a mystery. I've given their supposed classics revisit after revisit over the years but still seem to be no closer to figuring out what it is that people see in them. Sure, lead guitarist Criss Oliva is an absolute virtuoso of the highest order but that's really all that they offer as far as I can see & you'll rarely find a better example of that than their highly praised 1989 fifth album "Gutter Ballet".

Rightly or wrongly, Savatage have always been tied to the US power metal scene for one reason or another. The term was first devised to label an early-to-mid 80's US movement that saw many bands dropping the hard rock backbone that the NWOBHM had been holding on to & blurring the lines between heavy metal, speed metal & thrash metal via a chunkier guitar sound & more aggressive riffage. It's always seemed strange to me that Savatage were attached to that particular movement as (unlike bands like Metal Church & Omen) they simply aren't any heavier than most of your major NWOBHM acts. It seems like front man Jon Oliva's overly theatrical delivery & the band's more progressive approach have fooled people into believing that there's some reason to differentiate them from the heavy metal masses but if you really break it down there's absolutely no need for it, even with their earlier works which were significantly more metal than "Gutter Ballet".

But despite their previous links to US power metal, "Gutter Ballet" sees even those who clutch onto that ideal with the firmest grip starting to loosen it a little because it was this album that saw the band starting to drift away from the rest of their peers by experimenting in some fairly uncharted territory. It's been pretty widely publicized that this album was heavily influenced by an epiphany that came over Jon Oliva while watching a theatre performance of "The Phantom Of The Opera" & this led to Jon making a change in his song-writing style that resulted in Savatage taking on an increasingly theatrical style. There are definitely some songs where that is more obvious than others but I think it's fair to say that it's one of the more noteworthy features of the album. The other is the stronger influence of Pink Floyd's 1979-83 concept albums & The Beatles' later material on the Savatage sound as it sees "Gutter Ballet" taking on a similar aesthetic during the more introspective moments. But unlike those two super heavy-weights of progressive rock & psychedelic pop, Savatage don't quite seem to know where the line between artistic expression & self-indulgence is. I don't mind the greatly increased use of piano & symphonics in Savatage's sound but it's Jon Oliva's clear lack of understanding of his own technical limitations & apparent passion for camp Queen-style operatics that really get my goat.

It's not all doom & gloom though. There are several really decent track included here, particularly those that see Criss moving closer to the forefront at the expense of his brother. The clear highlights for me are the three minute instrumental excursion "Temptation Revelation" (which serves as a nice platform for Criss to showcase both his technical artistry & an impeccable sense of melody) & the closing track on the CD version of the album "Thorazine Shuffle" (which is about as heavy as Savatage get on the album & leaves me baffled as to why they'd leave it off the vinyl version). A couple of the heavier filler tracks like "She's In Love" & "The Unholy" are pretty good too, as is Criss' short folk guitar interlude "Silk & Steel". Interestingly, none of these are the tracks that "Gutter Ballet" is known for though & it's a very clear indication that you don't get on with a band when their most popular songs are the ones that you dislike the most. My ears simply can't tolerate the sheer pomp & cheese that goes on in the ballads on this album. The title track & "When The Crowds Are Gone" seem to sit amongst the most popular tracks of Savatage's career but they give me similar reactions to hearing fingernails being scraped down a chalkboard & "Summer's Rain" doesn't fair all that much better to be honest. Heavier material like "Of Rage & War" & "Hounds" certainly sounded a lot stronger on the "Ghost in the Ruins: A Tribute to Criss Oliva" live album (as did the title track to be fair) but here they suffer from some seriously inadequate chorus hooks that sound very forced & leave me a little dumbfounded as to how people deem them to be acceptable.

Given my score though, it's clear that I appreciate the effort that Savatage have made to do something a little different here & those four or five tracks that I enjoyed do tend to overcome the less appealing balladry to an extent but it's not enough to save "Gutter Ballet" from being yet another Savatage record that failed to captivate me. It would certainly represent somewhat of a turning point in their career as the elements that were initially incorporated here would be explored further in the coming years but I can't say that this is something that excites this ol' metalhead too much as I don't honestly think I'll ever be able to cope with a Jon Oliva-fronted Savatage record if I'm being completely open & transparent. Oh well.... where the fuck is my Bathory collection when I need it??