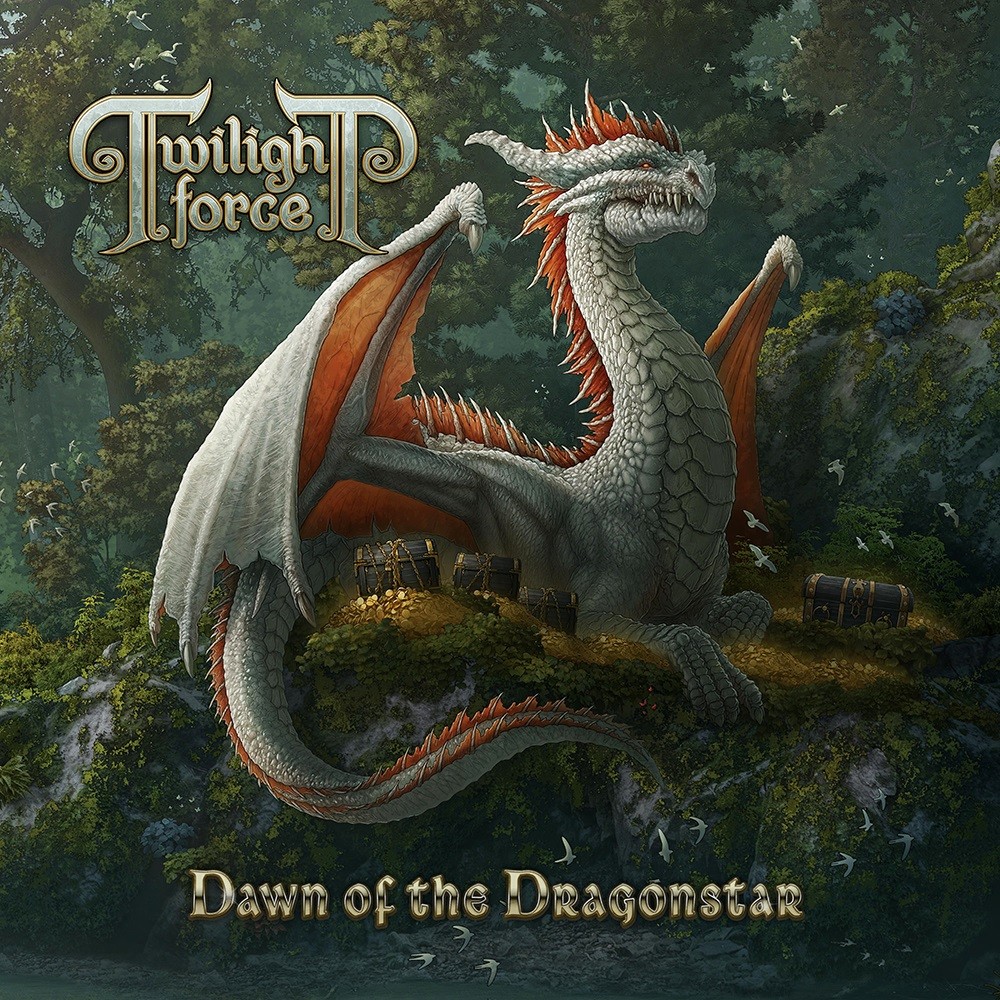 Saviors From The Twilight Kingdoms

2019 has been a diverse and exciting landscape for the usually derivative genre of Power Metal, with releases from Ancient Bards, Beast in Black, Avantasia, Týr, Iron Savior, Steel Prophet, and many others putting their best foot forward. In terms of more classic Power Metal, though, I was certain that nothing would top Gloryhammer's Legends From Beyond the Galactic Terrorvortex in terms of bombastic and fun absurdity. Especially since Rhapsody of Fire's newest installment The Eighth Mountain was extremely disappointing, I was ready to leave the neoclassical fantasy Power Metal behind this year and submit to the sci-fi overlords. Then, from the clouds, swoops a mighty dragon, signalling the entrance of the Twilight Force to lead me back to the fantastical lands of old filled with mythical beasts, kings and queens, and completely redundant quests to find yet another sacred weapon. Dawn of the Dragonstar throws down the Power Metal gauntlet and dares any other band to challenge their craft.

It's almost unfair how good Twilight Force are at their genre, combining shredding neoclassical guitar wankery with gorgeous orchestral arrangements that don't let up for a second on any track. Dawn of the Dragonstar is energetic, bold, and pretentiously accepting of the absurdity that is Power Metal. It helps that Twilight Force is made up of fantasy characters that are created by the band members in the world of The Twilight Kingdoms with names like Blackwald, Aerendir, and De'Azsh. I'm of the opinion that Power Metal is a go big or go home genre, and Twilight Force absolutely goes big, with each band member cosplaying their character complete with costumes on stage for live performances. By embracing the ridiculousness, they set themselves up perfectly to just go wild with whatever fantastical tropes they want accompanied by their massive orchestration.

The original vocalist who was responsible for the shrieking high notes on Twilight Force's first two albums sadly didn't make it to Dawn of the Dragonstar, which may be concerning for longtime fans since he gave the band a very original sound thanks to his upper register. It was a somewhat necessary casualty though, as his replacement is none other than Alessandro Conti, under the alias of Allyon, who was the vocalist for Luca Turilli's Rhapsody. After adding another piece of red string to my cork board tracking all the Power Metal bands that somehow trace back to Rhapsody, it's safe to say that this change was controversial, even for a newer fan like myself. The previous vocalist, Christian "Chrileon" Eriksson, had a unique, exciting, but somewhat grating style that helped Tales of Ancient Prophecies reach a diamond-in-the-rough status. As Twilight Force's scope of production widened and they became more bombastic on Heroes of Mighty Magic, his effectiveness began to wane as he was drowned out by the rest of the orchestration. Conti's voice is overall more experienced, powerful, and is a welcome change although it's less original overall as he's been in many other Power Metal projects. He even has the pipes to hit some impressive and staple high notes without going into Eriksson's shrieking dog whistle territory.

The instrumentation and composition of the orchestra is masterful throughout the album with a few amusing bits thrown in the mix, like the banjo and violin section in "Thundersword". It has a massive and adventurous feel without sounding too blown out and busy, with interesting melodies around every turn for your ear to latch onto. Every track is energetic, engaging, and somehow able to push the pace for its entire run-time, even through the twelve and a half minute Asian-inspired "Blade Of Immortal Steel". These slight shifts in style that each track has keeps the album twisting and turning, as if travelling through The Twilight Kingdoms. The climaxes and solos are insanely fun as well, which is exceedingly difficult to pull off since bands like Rhapsody have been writing these same sort of solos for decades at this point. They just have so much life and energy put into them that it all feels genuinely powerful rather than pretentiously overblown.

Dawn of the Dragonstar has this energy that is infectious and breathes life into the neoclassical and purely fantasy style of Power Metal. It's the same formula as many other bands, but it is written and performed with such an awesome amount of musical talent that it's difficult not to get engrossed in this world they've created. Take note upcoming fantasy Power Metal bands, because if you're going to go big, go Twilight Force amounts of big.

In a time when fantasy-based symphonic power metal is heading down to its lowest point, there is one band that has helped continue those tales of dragons and wizards, and that band is Twilight Force! Around that time, there were many things that caused the downfall of symphonic and power metal; Rhapsody of Fire is now without Luca Turilli and Fabio Lione who both went on to form the more progressive Turilli/Lione Rhapsody, Wintersun still hasn't released their second Time album, Helloween was too busy with their Pumpkins United World Tour to pump up a new album, and Freedom Call is not exactly taking their power metal seriously. Fortunately, Twilight Force has made up for it by marrying their usual power metal speed and melodic cheer with film-score orchestration the way it was meant to be, already reaching its peak in their third album Dawn of the Dragonstar, the one album many symphonic power metal fans have been waiting for besides Fairyland's Osyrhianta! In 2017, the year I started listening to Twilight Force, the glass-shattering male operatic vocalist Christian (Chrileon) Eriksson departed from the band. Tommy Johansson, lead singer of Reinxeed (later Majestica) filled in for a tour then had to go back to his band. Then in 2018, same year as when I gave up Twilight Force and initially my earlier epic metal taste, just when the search was futile, a miracle happened. Remember Turilli/Lione Rhapsody? That band was formed by Lione after he left Rhapsody of Fire and Turilli after his previous band Luca Turilli's Rhapsody dissolved. The latter band's vocalist Alessandro Conti ended up being left in his main band Trick or Treat, but then when he got to join Twilight Force, it was the best of both worlds, reaching the band's pinnacle of credibility in this 3rd album, faster than Rhapsody of Fire throughout their Emerald Sword saga. His more balanced yet high tenor voice has proven to be more conducive to this technical sound that has more layers than an onion, continuing both sides' journeys through the fantasy realm.

Besides the change of vocalist, some of the ideal endeavors they've planned in the studio are both similar and different to what they've achieved in their first two albums. Those positive alterations in well-rounded symmetry have distanced them away from the overuse of spoken interludes and lack of epics in Tales of Ancient Prophecies and how drawn out Heroes Of Mighty Magic was. Like I said earlier, Conti has a more measured vocal approach, and while there are ultra-high screams, they're used sparingly, allowing his natural voice to shine in epic splendor. And those are just subtle developments, the formula is the same but new and improved, fast-paced shredding anthems blended with symphonic orchestration that belongs to a Hollywood blockbuster soundtrack, delivering one of the grandest metal mixes of symphonic, power, folk, and neo-classical in history, put together with story-like chapters to sound like a fantasy audiobook with metal soundtrack.

Beginning with a brief narration with a brass section, the opening title track blasts off, blazing through fast-paced speed/power metal over mighty symphonic glory. Massive brass strikes like thunder in "Thundersword" continuing the legendary Disney-like orchestration. The delightful melody of "Long Live the King" makes me think of the brighter side of TSFH. "With the Light of a Thousand Suns" is definitely a longer elaborate orchestral metal anthem. Even its bonus orchestral version is a mighty feat!

"Winds of Wisdom" continue the twists in structure and style along with the symphonic grandeur great for the Christmas season. Then we cruise on through "Queen of Eternity" with its relentless riffing and happy orchestration. "Valley of the Vale" is another epic escapade of mighty heights.

"Hydra" is another longer lingering track but continues the melodic sense of fanfare. That song could make a good anime opening theme or another one of John Williams' soundtracks. The band still has their strength picked up from their previous album. The music is epic with gorgeous orchestration, so is the cover art that reminds me of Magic the Gathering. And holy sh*t, that nice melodic guitar solo is amazing! Hail Twilight Force!! HAIL HYDRA!!! "Night of Winterlight" is an enjoyable and passable track. "Blade Of Immortal Steel" is a massive closing epic with its length reigning at 12 and a half minutes, and it can very well overthrow "Keeper of the Seven Keys" as the king of power metal epics, having many ideas thrown in such as solos and eastern elements while, despite all that and its length, still sounding catchy and accessible. Unbelievable!!

In spite of the darker heavier metal genres reigning both the metal community and my metal taste, Twilight Force have made sure that the power metal scene is still around with one of the greatest power metal albums to conclude the 2010s, which shows the band still shining with a different vocalist. Anyone who has stopped listening to power metal during the early 2000s might not be ready to handle at least one overly symphonic song from this album, and needs to catch up first. Anyway, D&D fans and fantasy role-players will definitely enjoy this. So get your pet dragons, blades, and spell-books ready. Dawn of the Dragonstar is a grand epic metal adventure you don't wanna miss!

Favorites: "Dawn of the Dragonstar", "With the Light of a Thousand Suns", "Valley of the Vale", "Hydra", "Blade of Immortal Steel"