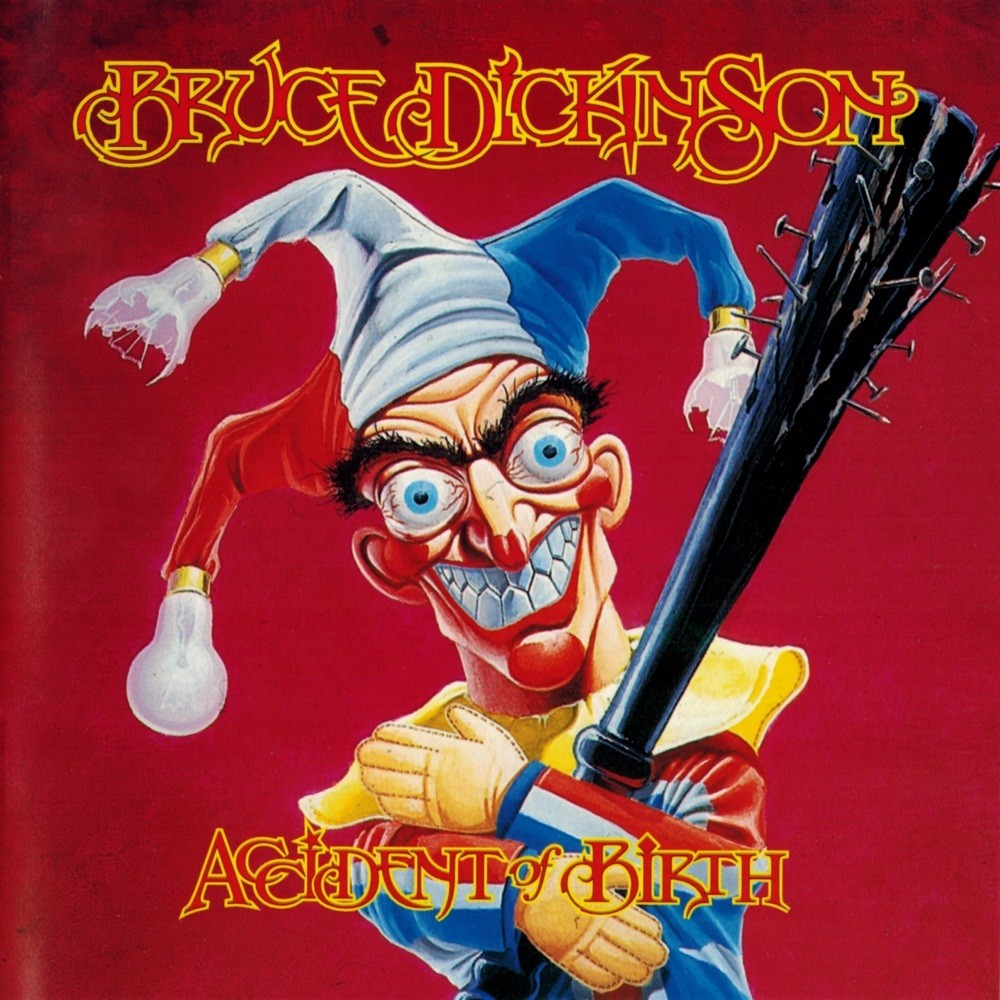 Any fan of heavy metal in the 90s would listen to Guns n' Roses and Bon Jovi before getting into Iron Maiden and finally the lead singer's solo material. For a 21 century metalhead like me, it's kind of a step backwards; I've gone through many different metal genres before getting into one of metal's greatest vocalists Bruce Dickinson. His temporary departure from Iron Maiden came with a change of style for his first two or three solo albums, but this album marks the return of the British metal king!

Accident of Birth is simply perfect! You can hear Bruce's singing in his own album that's both similar to and different from a band that has been in the top for far too long. With guitarists Maiden mate Adrian Smith and Tribe After Tribe's Roy Z by his side, Bruce dropped the experimentation act for a more unique album resembling Maiden. Back on track with his metal, there are epic raging songs of furious thunder and incredible ballads of exquisite peace. The Dickinson-Smith duo really brings up some Maiden vibes, and Smith can perform better compositions. Roy Z is also good at his guitar, and so are the bassist and drummer in their respective instruments, ready to kick a**...

Kicking off the album is "Freak" with a strange guitar intro before exploding into a pure metal riff through your speakers. The bombastic drumming will have you headbanging in no time along with Bruce's deliriously grand voice. The brilliant charm of the song is its midway break. Perfect starting track! "Toltec 7 Arrival" is a short atmospheric pathway to what comes next. The killer "Starchildren" has f***ing heavy guitars to amaze your brain. The catchy chorus would make sure you sing along for a long time. "Taking the Queen" makes a beautiful acoustic entrance with mesmerizing vocals before the guitars get more cleverly aggressive. Nice! The 7-minute epic of this album, "Darkside of Aquarius" is characterized by the pace of the guitars and drums, along with one of the best solos here, then a serene passage, and blasting off into the finale.

But what's really the best track is "Road to Hell" with absolute genuine metal. The dynamic drums blast through an awesome metal riff storm with no way to deny how superb the lineup performs. This is the Maiden I prefer to hear! The first ballad here is the wonderful "Man of Sorrows", where Bruce's emotional singing shines over beautiful piano. I can feel my spine shiver like h*ll with that background violin tone. Bruce has made cool ballads before, but this is his height of balladry! The title track is a diamond jewel with blistering strength and heavy devastation, especially in the rhythm. The lyrics very much reflect on his return to metal. Welcome home, Bruce!

"The Magician" is the catchiest song here, entertaining you with groovy rhythm in a hard rock/metal vibe. "Welcome to the Pit" is not bad, but it kinda falls flat and minuses one point from the album's perfection (now at 99%). The slow dark atmosphere doesn't really fit right. "Omega" is such an epic word but it's wasted on a semi-ballad. That's OK because it's a beautiful song with excellent guitars and singing especially in the explosive chorus. "Arc of Space" is a peaceful acoustic composition to end the journey.

The emperor of metal reclaimed his throne, and with that, thank you Bruce! Also thanks Daniel for the recommendation and Ben for adding this album and using a cleaner (yet still a bit creepy) album cover than the original one that is like some graphic Alien sh*t that would make you unable to sleep for a while. This singer is so Bruce!

You know what, despite my love affair with Bruce Dickinson’s incredible run of form with Iron Maiden throughout the 1980’s, I kinda ignored former front man Bruce Dickinson’s early 90’s solo albums. They weren’t exactly being hailed as modern-day classics at the time & my taste had moved into significantly more extreme areas by that stage so it wasn’t until 1997’s “Accident Of Birth” that I found enough encouragement to give Bruce’s solo work a chance & this was largely because of the mountain of praise his fourth album “Accident Of Birth” was receiving. The return of former Maiden buddy Adrian Smith on lead guitar was certainly a drawcard as well & the combination didn’t disappoint with many critics claiming the album as not only a return to form but one of the best metal albums of the year.

But those of you thinking that you’re in for a Maiden record under a different name better think again. “Accident At Birth” may feature those glorious higher register vocal hooks that we’re all so fond of however the instrumental component certainly doesn’t sound all that much like Maiden. There’s a down-tuned chug to the guitar tone that’s much more in line with the groove metal sound that was so popular during the 1990’s & the strong focus on melodic guitar harmonies is nowhere to be found. This was clearly a band that was looking to become relevant in a late 90’s market that had moved on from the classic heavy metal sound but still wanting to keep a foot in the camp of past glories through Bruce’s inimitable qualities.

I can’t say that the instrumentation is half as interesting as Maiden’s best work. It really does play a supporting role to the vocals which isn’t such a bad thing as Bruce is in fine form here but it does see the album’s potential to compete with his best 80’s work having a definite cap placed on it. The lead guitar work is obviously top notch & is often presented in a way that sees the solos creating crescendos that represent the climaxes of the songs. The strength of the album is in its general consistency & overall professionalism though. There’s only really one track that I struggle with in the fairly cheesy symphonic rock ballad “Man Of Sorrows” but the rest of the material ranges from quite enjoyable to genuinely mind-blowing. The two tracks that reside on the high side of that equation are “Taking The Queen” & “Welcome To the Pit” for me, neither of which sit amongst the more celebrated tracks on the album but I’m sure you’re all aware that I don’t run with the pack in that regard. Those are the songs where the chunky riffs hit me hardest &, more importantly, the anthemic vocal hooks grab my emotions in the most violent fashion. They’re prime examples of Bruce at his very best & I regard them both as sitting amongst the very finest heavy metal anthems of the 1990’s.

1998’s “The Chemical Wedding” album is generally regarded as Bruce’s best solo work & rightfully so in my opinion however “Accident of Birth” isn’t very far behind it with “The Chemical Wedding” winning out due to a greater quantity of genuine highlight tracks. They’re both very solid outings that do their level best to remind you of why you love classic Maiden so much but don’t quite hit you as hard or as long as those 1980’s albums from your youth did. But that’s not to say that these are disappointing records by any means, particularly if you’re a Maiden or Samson tragic. Both of them are high class efforts that should appeal to any fan of the classic heavy metal sound.