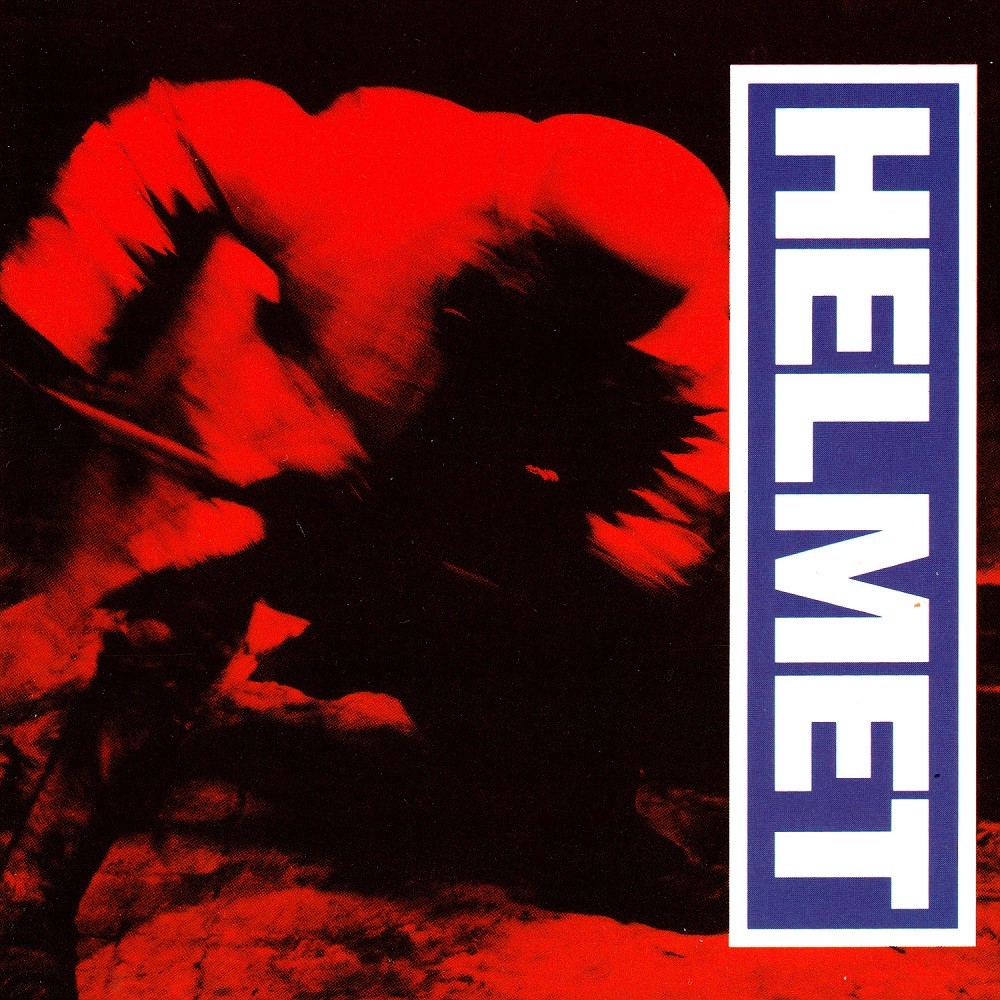 New York alternative metal four-piece Helmet first became known to me through late-night underground metal radio programs at around the time that their 1992 sophomore album “Meantime” was released & they were pretty hard to ignore to be honest. Helmet’s highly regarded 1990 debut album “Strap It On” had somehow managed to drift past without me even noticing however “Meantime” could not have come at a better time for the band as it was everything the grunge-obsessed rock market were wanting & they lapped it up big time. I kinda found myself watching from afar without ever making any genuine commitment but I developed a respect for Helmet that saw me regarding them as a talented & relevant band for the 90’s alternative generation. Interestingly though, I don’t think I’ve ever actively listened to one of their albums in full until now.

Given my fairly casual acquaintance with Helmet up until now, I was actually surprised to find that my familiarity with “Meantime” extended past the obvious couple of hits in “Unsung” & “In The Meantime”. I was also very familiar with “Give It” & “Turned Out” which turned out to be a big positive for the record's chances of gaining my interest early on. I wouldn’t say that there were any other genuine surprises in store for me though as Helmet had a very good grasp of their sound by this stage & I subsequently found “Meantime” to offer a consistent approach & level of quality throughout it’s relatively short 37-minute runtime. Although it’s been noted that the band seem to have two gears on this album with the more commercially focused & the tougher material being evenly spread, I have to admit that I feel that’s overstating things a touch. All of the ten tracks take a pretty similar direction as far as I can see with only the vocals taking a more accessible & slightly poppy direction on the tracks that are presumably being referred to. I think it’s a bit of a stretch to call that an obvious attempt at hit-writing to be honest as these songs are usually as hard-hitting as the rest of the album from an instrumental perspective.

Helmet’s base sound is very much based on the grungy tone of the time with the guitar sound reminding me a hell of a lot of Seattle-based grunge gods Soundgarden. There’s certainly a hardcore edge to things though with some of the riffs & vocal performances sporting a gnarliness that wouldn’t have seemed out of place on Nirvana’s rough-&-ready debut album “Bleach”. The big difference between Helmet & their peers though is how strongly they rely on precisely executed & often fairly complex groove-based syncopated rhythms within their riff structures. In fact, they remind me a fair bit of fellow New Yorkers Prong in this regard. What we have here is heavily riff-based music that sees all four band members honing in on the one idea & looking to maximise its value with the bass guitar lines of Henry Bogdan playing a major role in accentuating the band’s overall heaviness. If you’re familiar with English sludge metallers Fudge Tunnel then you’ll know what I mean although Helmet are admittedly more rhythmically ambitious. Despite the apparent complexity in some of the unusual time signatures though, this united focus on the riff does tend to make Helmet sound a little less sophisticated than it probably should as there’s not all that much to this album. Every song sports hard-hitting, groove-based riffs that are all beautifully executed but don’t offer a lot of in the way of emotional engagement & depth. The post-hardcore references that seem to gain traction with this album are pretty misguided as there’s nothing “post” about this material in my opinion. It’s as riff-based as you’ll find with little attempt being made to explore anything more atmospheric or textural.

Front man Page Hamilton is the clear focal point of the band & he opts for a shouty, hardcore-inspired delivery a lot of the time. He’s not the most talented of vocalists but often reminds me of a less tone-deaf version of Godflesh’s Justin Broadrick in that he’s more about attitude than he is technique. I have to say it works for him pretty well but I’d be remiss if I didn’t highlight that a more obviously talented front man could have taken Helmet to another level. I mean the fact that I get so many Soundgarden vibes from Helmet’s instrumentation is enough to highlight the obvious gap in class between the two bands & a lot of that comes down to the chalk-&-cheese comparison between a vocal god like Chris Cornell or Alice In Chains’ Layne Stayley & the serviceable performance Page puts in here. I do like the noisy approach to the guitar solos though. It adds a layer of intensity to proceedings just when the song-writing is starting to sound a little too easy on the ear.

Look, despite my minor qualms “Meantime” is a really consistent record. You won’t find a weak track amongst the ten included here with the quality ranging from pretty decent to very solid. In fact, I was a bee’s dick away from upping my score to a 4/5 but eventually decided that I didn’t connect quite as much with Helmet’s sound as I’d like which prevented me from finding any single track to be an alternative metal classic. Songs like “In The Meantime”, “Give It” & “Turned Out” will always get me feeling a little nostalgic for a simpler time but I don’t think I can say that this album competes with the top tier of the genre. It’s a consistently enjoyable listen that delivers exactly what it promises from the first seconds of the opening track. I just would have liked to see Helmet experimenting with a more cerebral & visceral sound on occasion. They definitely had their own thing going on though & it’s actually pretty hard to think of anyone that sounded much like them at the time which is a point worthy of respect.

P.S. How obviously did Kansas-based grunge outfit Paw rip off the opening riff from “Unsung” on their 1993 hit “Jessie”?? They’re pretty much exactly the same & neither are all that far from the opening riff from Alice In Chains’ “Them Bones” which came out a few monthly after “Meantime” either.

Meantime by Helmet is an album of two tales. On one hand you have the more ruckus songwriting of "Iron Head" and "Turned Out", and on the other you have the more accessible version of alternative metal that gave us songs like "Role Model" and of course the big promo single "Unsung". In both cases, these songs are mixed very well with a clear emphasis on the grunge aspect. Guitar parts are muddy, even though the bass lines are well developed. And the percussion has a distinct punk sound to it that had me reckoning back to Minutemen's Double Nickels On The Dime. Page Hamilton's vocals range anywhere from Zach de la Rocha screams to a cooled out Ozzy Osbourne impersonation on "Unsung".

The sounds are impressive and still sound fresh almost thirty years later. I think that this album's biggest flaw is how often it flip flops between the two styles mentioned previously, and while that doesn't bother me as much as it does some other reviewers, I can admit that it does get irritating at times when it is clear that Helmet want to go for broke with a full hardcore punk/metal sound, but feel restrained by record label requirements and promotional singles. This album has more reference points to a band such as Big Black than anything that RATM, Alice in Chains or Tool were doing around the same time. And while I do like this sound, I feel like Meantime could have shot higher.

The clean gruffness of Helmet is an acquired taste; indeed, they are a band I really must be in the mood for. Some days I find listening to them to be a very impatient experience and I find myself wanting more urgency to proceedings. Other days (like today) I am happy enough with that lurching pace and melancholic lead work delivered against that alternative rock backdrop that the band do so well.

At times I find myself frustrated by the catchiness of Meantime like it is sold short somehow by the fuzzy mood of the guitar tone and the monotone vocals which do not do the infectiousness of tracks such as Unsung enough justice. On other occasions I really click with that half-cooked nature of such tracks and recognise how well put together that almost juxtapose of elements is. In terms of consistency though it is hard to find fault with Meantime. It walks that fine line between steady and boring well on the side of the former. It is no frills metal that really feels like the band know their niche and do not see much advantage in stepping outside of it.

The slapping sound to the drums does irritate over time though and that rolling riff that sits behind most verses certainly gives value for money over ten tracks. Still though, I cannot deny how much I enjoyed revisiting this album for the purposes of this review. Noticing the clever use of the bass to add variety to the songs is something that passed me by however many years ago it was that I last sat down with Meantime.

I guess given that my moods will shift more than Helmet’s style and sound ever will I am never going to give this a high rating. Some of that is down to me I accept and not necessarily entirely at the fault of Page and the gang. I believe reviews should capture that moment in time and so today Meantime gets a worthy yet not too exuberant 3.5 stars.