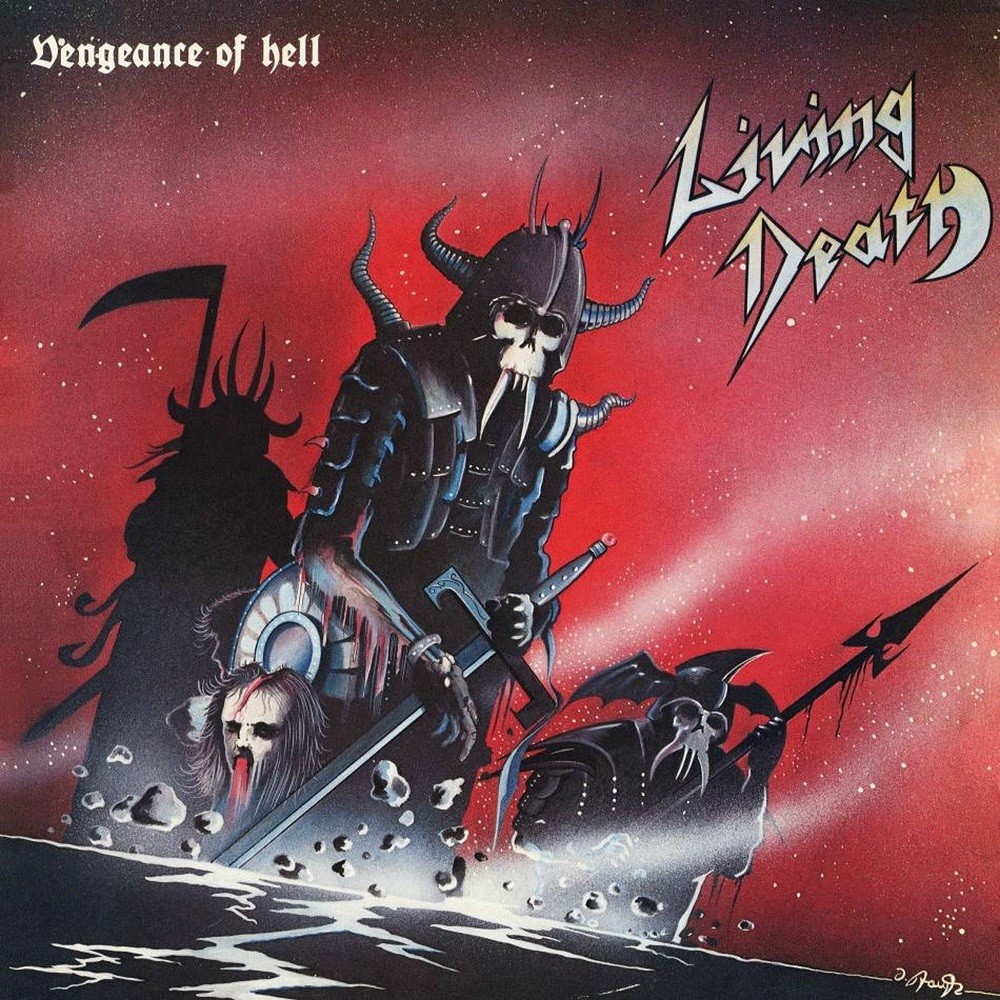 1984's "Vengeance Of Hell" album represents the debut full-length effort from a five-piece German outfit going by the name of Living Death. Well in truth they were actually only a four-piece by the time they entered the studio. Their drummer had quit just prior to the recording sessions commencing which meant that they were forced to engage a session drummer in order to complete the record as planned which isn’t a good start to be honest. But the band forged ahead regardless & the resulting album is worth mentioning as it was released just prior to the birth of the Teutonic thrash metal scene which (much like its more celebrated US brother) would develop its own Big Four in Kreator, Destruction, Sodom & Tankard.

And the reason that this is relevant is because “Vengeance Of Hell” isn’t a pure speed metal release. In fact, despite its general reputation for being a predominantly speed metal focused affair, I’d suggest that it's actually comprised of just as much traditional heavy metal & even a few tracks that qualify as legitimate thrash metal which would make Living Death the root of the Teutonic thrash scene; at least as far as proper album releases go. And as for that variation in style across the tracklisting, I’d suggest that it’s a pretty safe bet that what we’re hearing here is the progression of a band that started out as exponents of the classic heavy metal sound & subsequently decided to move into speed & thrash metal territory. Only they’ve recorded their debut album before they’d fully completed the transition which has left it sounding a little unfocused.

The record was released through Belgian label Mausoleum Records which was also the home of several other noteworthy European releases such as Ostrogoth’s “Ecstasy & Danger”, Wolf’s “Edge Of The World” & Warlock’s “Burning The Witches” but sadly time hasn’t seen Mausoleum being remembered too fondly by underground metal fans as they developed a bit of a reputation for inconsistent quality & less than acceptable production jobs. The Wolf record is a fine example of what I’m talking about here & sadly, Living Death would fall victim to the same production curse because “Vengeance Of Hell” sounds truly awful with the instruments all combined into one muddy & overly bass-heavy mess for the most part. There are even some inconsistencies across the tracklisting with noticeable changes in sound from one track to the next. The absolutely woeful “Riding A Virgin” is the worst example with the engineer having apparently forgotten to turn the guitars up to the same level as they are on the rest of the album. I’m honestly not sure how this can go through unnoticed or how the label could possibly deem it to be acceptable to release it like that. Perhaps they just thought that this particular song was so horrible that it really made very little difference & they’d probably be right because I’ve come across very few tracks that are as unlistenably bad as this one in my entire metal journey.

The main reason for that is front man Thorsten “Toto” Bergmann whose vocal delivery seems to take the more divisive aspects of Accept’s Udo Dirkschneider & Mercyful Fate’s King Diamond & amplify them until you almost can’t bare to listen to him any more. The dude simply can’t sing to save his life & it’s truly baffling that the three or four instrumentalists would all have agreed to play in a band with him at the helm. What’s even more strange is that there are some songs where he’s noticeably more tolerable than others; where he sticks to more traditionally acceptable techniques instead of inserting ridiculous banshee squeals or random psychotic rants all over the place. So one can only assume that some of this ridiculously inaccessible garbage was actually intentional! And when you throw in some sexually focused lyrical content that’s got less class than your average 13 year-olds slumber party it makes for a very challenging listen indeed. This is a real shame because the music behind Thorsten isn’t half bad.

The rhythm section don’t do anything particularly special but there are some light-speed riff assaults included here with Living Death challenging the likes of Anthrax for sheer velocity. The thrashier material is not too far removed from Metallica’s “Kill ‘Em All” while the more speed metal focused tracks have clearly been influenced by the faster Accept material with early Running Wild also springing to mind. Of the few more traditional heavy metal tracks, the half decent “Night Light” utilizes a mid-paced & crunchy AC/DC feel while the lone instrumental track “Labyrinth” is clearly an attempt to imitate Iron Maiden.

There’s some definite promise here but I can’t see that it was ever going to be fulfilled with this little attention to detail in the production & with a front man who frankly leaves you wringing your ears. Living Death would go on to bigger & better things in the near future so I see no real reason to subject yourself to this album.